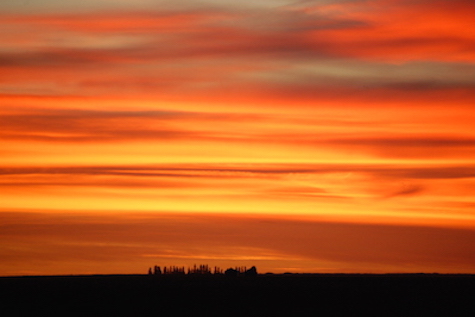 Some time ago I came upon a sentence, in a source I no longer remember, which succinctly captured my sentiments about the province where I was born: “Saskatchewan has a quiet stillness that permeates the soul.” During my lifetime, I have lived in all three Prairie provinces, the longest in Alberta, and the shortest, by far, in the central one located in the heart of the Canadian “Breadbasket.” Yet, every time I drive through Lloydminster and cross the border from Alberta into Saskatchewan, I feel as though I am coming home. The sensation of returning to my roots is so puissant that I am overwhelmed with memories, especially of my beloved grandparents, and my heart is filled with longing for one of my grandmother’s ensconcing hugs.

July was named by the Roman Senate in honour of the Roman general, Julius Caesar, since it was the month of his birth. It’s usually the warmest month of the year in most of the Northern hemisphere. July’s birth flower is the water lily, and its birthstone is the ruby, which I think appropriately symbolizes contentment. On the first day of July, wherever you may be, join in the celebrations of Canada Day, the national day of our country, a federal statutory holiday commemorating the anniversary of the enactment of the British North America Act on July 1, 1867. Originally called Dominion Day, the holiday was renamed in 1982, the year the Canada Act was passed. Most communities across our great nation will host celebratory observances, usually outdoor public events, including parades, festivals, barbecues, fireworks, and citizenship ceremonies for new Canadians.

This year, unlike the previous three, I have chosen to tour throughout Saskatchewan during the summer, rather than in the autumn. When I depart on July 9th, I anticipate leaving early enough to allow time to visit the Fort Battleford national historic site. I have always been fascinated by the part that Fort Battleford, established in 1876, played in some of the most pivotal events in the history of Western Canada. The Fort Battleford National Historic Site of Canada commemorates the role of the North-West Mounted Police at the fort from 1876 to 1885, particularly during the North-West Rebellion/Resistance of 1885, the “siege”of Battleford and the surrender of Chief Poundmaker to General Middleton’s forces on May 26, 1885.

I shall never forget a gorgeous summer morning 10 years ago when I stepped out of my recreation vehicle in the Kramer campground, which is located across the road from the white-washed commanding officer’s house on the historic site. I instantly experienced the pristine peace of the Prairies, and the feeling lingered with me throughout the day. I marvelled that this tranquil region could have been the site of one of the most tempestuous chapters in Canadian history. As I stood on a slight incline overlooking the confluence of the North Saskatchewan and the Battle rivers, gazing upon the horizon of the perpetual prairie sky, I felt rejuvenated and my soul was restored.

Cushioned between two appearances at the St. Albert Outdoor Farmers’ Market, during my 10-day tour in the middle of the month, I hope to re-establish friendships and to engage many new readers of my Understanding Ursula trilogy. Until then, enjoy the warmth of July, and I leave you with Henry James: “Summer afternoon—summer afternoon… the two most beautiful words in the English language.”