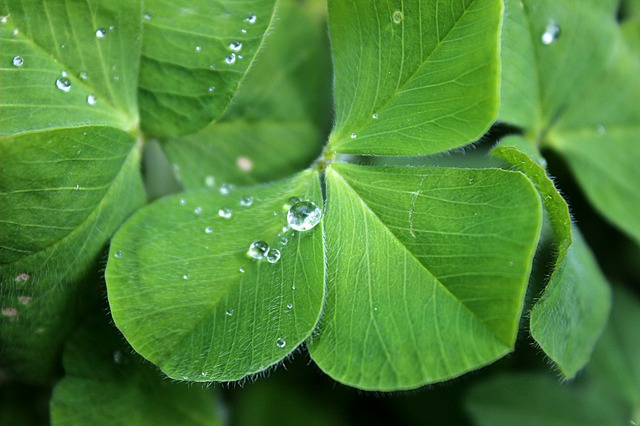 “Now when the primrose makes a splendid show, and lilies face the March-winds in full blow, and humbler growths as moved with one desire put on, to welcome spring, their best attire…” – William Wordsworth, Poor Robin, March 1840

Saint Patrick’s Day, or the Feast of Saint Patrick, is a cultural and religious celebration held on March 17, the traditional death date of Saint Patrick, the foremost patron saint of Ireland. The day commemorates Saint Patrick and the arrival of Christianity in Ireland, and celebrates the heritage and culture of the Irish in general. Saint Patrick’s Day is a public holiday in the Republic of Ireland, Northern Ireland, the Canadian province of Newfoundland and Labrador (for provincial government employees), and the British Overseas Territory of Montserrat. On St. Patrick’s Day, it is customary to wear a shamrock, the three-leaved plant that St. Patrick is reputed to have used as a symbol to explain the Holy Trinity, green clothing or green accessories, the colour associated with Catholics in Ireland.

And yet the interminable wait goes on. From my earliest memories, I truthfully own that waiting has been one of my greatest challenges, although I wonder if I am alone. On the other hand, I suspect that individuals of my vintage may be far less impatient than many young people today in our fast-paced, ever-changing world with its expectations of instant entertainment and gratification. Still, I justify my impatience as arising from the fact that I am an action-orientated personwith a constant need to be accomplishing one  task after another. Whether I consider ‘wait’ a verb defined by The Canadian Oxford Dictionary as “remain inactive for a specified period of time or until some expected event occurs,” or as a noun “a period of waiting,” I become equally distressed with either prospect.

But now I too wait with my FriesenPress progress report indicating that all of their 12 steps have been completed. Much work has been done, and I have just received word that we are about to go to print! I do hope all of my devoted readers believe in Andy Warhol’s notion that “The idea of waiting for something makes it more exciting.”

I have exciting news! The launch of Lords and Lepers has been confirmed for SATURDAY, APRIL 28, 2018, from 2 to 3:30 p.m. at the St. Albert Public Library, 5 St. Anne Street, St. Albert. Your personalized digital book launch invitation is coming soon!

Please have a look at the back cover copy from Lords and Lepers:
Six-year-old Francine Stonehenge lives with her parents near the ocean in Cavendish, Prince Edward Island, when the unthinkable happens: both her parents drown. Her aging uncles, whom she has never met, take her by bus, ferry, and train to live with them on their sheep farm in Manitoba. As she settles into her new home, Francine remains traumatized by the death of her parents, for which she feels responsible. Even the pristine peace and stillness of the Prairies don’t keep her recurring nightmares at bay. With the loving support of her uncles and new stepmother, Francine builds friendships and, before long, becomes one of a foursome with Cassandra Jamison, Jessica Yang, and Hope Harding. This epic prairie saga tells stories of bullying, elopement, prodigious talent, fraudulent greed, heartbreak, death, joy, and deep love. As the girls lose their innocence and mature into young women, they forge lifelong friendships; share the pinnacles of success and the depths of despair; and experience how all too often people are valued for what they have or what they do rather than for who they are.

“If you have a garden and a library, you have everything you need.” – Cicero. In the event that you cannot find a shamrock, wear green, and have an awesome St. Patrick’s Day!
Corinne
Tags:
Lords and Lepers, March
Share: