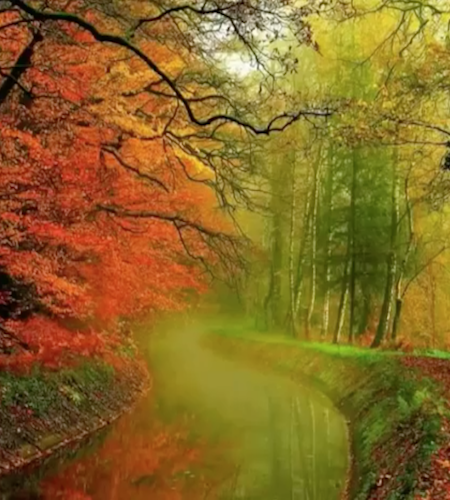 “There is something in October sets the gypsy blood astir. We must rise and follow her; when from every hill of flame, she calls and calls each vagabond by name.” – William Bliss Carmen, acclaimed New Brunswick poet

“Radiant joy is everywhere. Spirits in tune to the spicy air, thrill in the glory of each day. Life’s worth living when we say, October!” – Joseph Pullman Porter

October, the 10th month of the current Gregorian calendar, is one of 7 months with 31 days. This second month of autumn derives its name from “octo”, Latin for “eight”, when it was the eighth month of the ancient Roman calendar until the month-less winter period was divided between January and February. October comes with an extensive registry of daily and month-long observances, with Thanksgiving being the most notable in Canada. In many countries it is also associated with Halloween, which has a history of mystery, intrigue, and controversy. The traditional birthstone amulets of October are opal, rose sapphire, and tourmaline, and the calendula is the birth flower.

Still, it is Indian summer that I anticipate most in October. During this month, every day of unusually dry warm weather is a blessing. When such days occur, I often choose to enjoy a glorious afternoon drive in the country. For more than a decade, I journeyed the picturesque road to Athabasca at this surreal time of the year to rediscover inner strength and peace in all the beauty and sublimity which only Mother Nature can offer. I could not agree more with Nathaniel Hawthorne, one of the greatest fiction writers in American literature: “There is no season when such pleasant and sunny spots may be lighted on, and produce so pleasant an effect on the feelings, as now in October.”

Perhaps it was not by accident that the dawn of my becoming an author occurred in late autumn. One definition of Indian summer in The Canadian Oxford Dictionary is “a late period (of life, of an epoch) characterized by comparative calm.” I had dreamed of being a writer by the age of seven, and although during my career as a nurse educator I wrote extensively, I did not begin to pen my trilogy until I was 57. I was nearing 66 when my first book Arriving: 1909–1919 was published on October 5, 2011. By 67 I subsequently released my trilogy, and before I reached my 68th birthday, I had become a bestselling author in Canada.

I experienced many pleasant, tranquil moments when I was reflecting upon the essence of this letter, realizing that a host of my milestones as an author had occurred during this month of beginnings. In fact, I wonder if my decision in 2012 and 2013 to arrange book tours that took me as far afield as Winnipeg, Manitoba, was motivated by the prospect of driving across the Canadian prairies to enjoy the remnant of autumnal colours. Due to worse weather than I’d hoped for during those trips, I’ve now reduced my touring to just Alberta and Saskatchewan during spring, summer, or early September.

This October, now five years later, my Ursula trilogy continues to sell, so I’ll take this opportunity to thank all of my avid readers for purchasing over 12,000 copies to date. When at last I began to write, I chose not only to pen the kind of books that I enjoy reading, but also to immortalize the real ordinary Canadian in my story. Today, I believe I achieved my objective that was similar to John Sinor’s, an American author and newspaper columnist who wrote about “Everyday problems of everyday people.” I leave you with one of his quotations: “October is crisp days and cool nights, a time to curl up around the dancing flames and sink into a good book.”